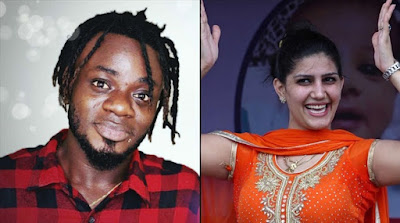 Sapna Chowdhury shared Samuel’s song on his Instagram, thanking him and writing … “Kare vo ghurur kaise kaamyaabi par, dekhi ho bardhi jisne kreeb se”. In the video shared by Sapna, Samuel is seen singing Swapna Chowdhury’s famous song ‘Gajban’. Swapna Chowdhury’s post has been liked by more than 1 lakh people.
Samuel’s Afro Touch has been very popular in Indian country songs. He has already sung Sapna Chaudhary’s most famous song ‘Teri Ankhi Ka Yo Kajal’. Not only this, Samuel Singh has created a sensation by singing many Bhojpuri songs. His popularity is such that the cover songs of several Bhojpuri songs sung by Samuel have surpassed the original song’s philosophy.
Samuel’s most popular song is ‘Rikinya Ke Papa’. Samuel came to light by singing this song sung by Bharatiya Janata Party MP and Bhojpuri actor and singer Manoj Tiwari. His song has been viewed more than 13 crore times. At the same time, he has sung many Bhojpuri songs including Pawan Singh’s hottest hit song ‘Lagagelu Tu Lipstick’ and Bhojpuri music composer Arvind Akela aka Kallur’s ‘Choliya Ke Raja Raja Ji’. Apart from this, he has also sung covers of many Bollywood songs.

Why does Samuel sing Indian songs?

Nigerian YouTubers and Singer were able to get their cancer treatment done in India. Samuel, a transport businessman by profession, listened to many Indian music at this time and he became interested in music here. During his six months in India, he became very famous in India, after which he also chose India for studies. He did his B.Tech from a university in Rajasthan and sang a lot of Indian songs during college.
His style of singing came to be liked. At the same time, she performed the Bhojpuri song ‘Lagagelu Naukri Lipstick …’ at a college function. This song made him a star. Since then he has sung many Indian songs since his return to Nigeria, which people are very fond of. He has sung many songs in Haryanvi, Punjabi, Bhojpuri and Hindi.