Sandeep is the first in the country to conduct such an experiment called ‘Farmers Pride‘, which directly brands farmers. Each product in its application contains the name, photo, and address of the organic farmer grown.

He appealed to the educated youth to return to the village. Impressed by Dr. Kalam’s appeal, Sandeep Sharma, a resident of Shivpuri in Madhya Pradesh, returned to the village in 2002.

Today, Sandeep has become a means of branding more than 200 organic farmers from 12 states of the country to increase their income. 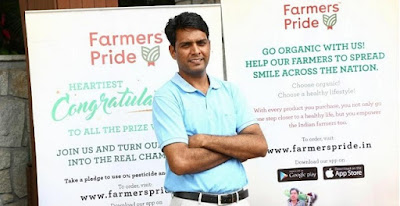 For this, they are using technology like websites and mobile apps.

Sandeep told The Better India, “Dr. Kalam often asked the youth to come back to the village and take up self-employment.

I started thinking about him. While studying engineering, I used to publish ‘Technical Today’ magazine for students’ self-employment.

Through the magazine, we have connected more than 2500 students from about one and a half hundred engineering colleges in Madhya Pradesh and Uttar Pradesh.

We would give Dr. Kalam’s thoughts as well as positive news in our newspaper. ”

During this time he met MC Gupta, Vice-Chancellor of Rajiv Gandhi Technological University. Gupta advised him to show unemployed people how to start self-employment.

Taking this advice, Sandeep Palli started his journey in India. From 2003 to 2013, he traveled to more than 200 rural areas in about 10 states and tried to understand rural life.

During this time he tried to learn more about indigenous cattle rearing, beekeeping, organic farming, food processing, and Ayurveda.

Thus, Sandeep Sharma took money from his 1 friend and based on his 10 years of experience bought 10 acres of land in a village in Bilaspur, and in 2013 he started experimenting with organic farming on his own.

He understood their experiment and helped Sandeep extensively in connecting with the locals.

After four years of training and testing with many organic farmers, Sandeep produced organic, but it was difficult to sell at the right price. Which was also the biggest problem of almost all organic farmers.

To solve this problem, in 2017, Sandeep started a new experiment called ‘Farmers Pride’ by combining organic farming with the pride and identity of the farmer.

Through this platform, he started selling organic products like pulses, rice, oil, molasses, etc. to the farmers.

Sandeep says this is the first such test in the country, which is directly branding the farmer.

On each website, the name, photo, and address of the organic farmer produced are written on the front of each product.

It adds to the relationship between the manufacturer and the consumer and enhances the farmer’s pride.

He said, “We provide information on the location of the farmer as well as the stock.

We have not only brought farmers’ products to market, but also branded organic farmers by playing expensive games like golf and various national and local events.

The local people now know these farmers. They are also getting the local market. “

“The prizes in the most expensive sport in the world have been incorporated into the farmer’s valuable organic products, this new tradition is making Tih farmers proud,” he said.

More than 200 farmer groups from 15 states

Sandeep said the work started alone in 2012 but today he has a team of more than 200 farmers from 15 states who cultivate organically on about 2,000 acres of land. All of them produce about 100 certified organic products.

Sandeep said, “It is difficult for a farmer to do all the work for agriculture

This includes testing the quality of organic production, packaging, marketing, distribution, and technical support. A team of 25 people is working together in Bilaspur and Noida. Their products are in demand not only in the country but also abroad. ”

Pilani students at the prestigious Birla Institute of Technology (BITS) are now coming to the internship with the Farmers Pride team without an engineering degree.

BITS Pilani has included Farmers Arrogance in its list of nearly 200 largest companies in the country.

Sandeep Sharma says the demand for organic products has increased. He says, “Chemical farming has reduced the quality of food.

So the body’s resistance to disease is declining. As a result, diseases like corona are becoming more difficult to deal with.

Quality nutritious food is necessary to prevent such diseases. As a result, demand for organic products increased during the Corona period. “

You can join this campaign of organic farmers through www.farmerspride.in or 7987551332.